Day 19
On Monday I had probably the most normal work day that I will have on this internship. I got to help Donny work on their webstore. Unfortunately we had some issues, so we weren't able to work as long as we had hoped. However, I was able to help Donny make the banner, logo, and color swatch for the page. We settled on puce and brown for the colors...it sounds kind of terrible, but it's actually not that bad. She's been working on it over the week and it's getting there. I learned a lot that day about webhosting; Donny even offered to help me set up my own website this summer if time allows.
Day 20
Tuesday was the day of my shoot with Maxwell. I was a little nervous about, partly because I had never really worked with a model who I didn't know really well and also because i was rather concerned about how it play out with Joseph and Donny there. My methods of shooting are still kind of all over the place; I don't always have an idea of what I want when I start, and usually I just have my models do "whatever" and then I get ideas. I was concerned about trying to work that way since what i gathered from ModelFest was that most times the photographers are expected to give the model more of a mood/direction to go in. It worked out alright though, because I actually had sort of formulated a character to go with the blue, white and gold mask that I bought from the store in Hollywood. It's still not completely worked out for me, but it was definetly a good starting place. My idea was that there was this wealthy girl whose family lost everything/died/something happened so that she ended up living on the street and working for a magician.

We started off shooting by taking Maxwell to the Good Will to look for a dress. I was a little concerned that i wasn't going to find anything that would work with my idea, but eventually Donny found the perfect dress. it was black with a blue lace over-dress. It was form-fitting until about the knee, where it flared out and had a slit up the right leg. It was definetly a good dress for a Magician's Assitant. Unfortunately, the dress was a little two small for maxwell, but it was so perfect that I decided to add a corset lacing up the zipper side so that we could still use it.

Simulatneously, Donny, Joseph and Maxwell were also shopping for possible Labyrinth of Jareth costumes. I found out that apparently Friday night is "steampunk" themed. I had often heard that term tossed around but I never really understood what it meant. For fear of seeming uneducated, I just listened and observed their sorting through various outfits and planned to go home and research it more later. They definetly acquired some good pieces (for LOJ as well as TOTF) and I even found a cool shirt for myself.

After we got back, I fixed the dress so it actually fit Maxwell while she did her makeup and hair. In addition to fixing the dress, I added some bits of fabric together to make a tattered shawl for her to use as a prop. Once I added some jewelry pieces were finally ready to go shoot. We started outside just using the alley behind their condo building. There were some good locations, although I wish we had been shooting in the morning since some of the areas that I wanted to shoot were too shaded for my taste. I shot only one set in the shade which was with this awesome red couch that happened to be outside. My favorite location was probably the corner of this awesome spiked fence. It cast a great shadow and Maxwell did a great job playing off of it. (I'll only post one of these for now, since I want to manipulate them before revealing the rest) 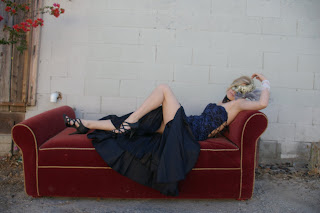 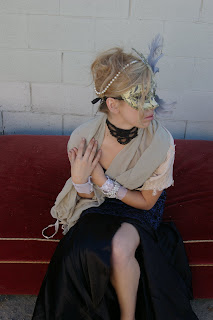 After shooting outside, we quickly went inside to the set with candles. I wish we had had more time; I would have spent a lot more time with these. However, I know I got at least 3 really good shots, so I'm excited to work with them. I have to buy some paint so I can try doing the cliche verre thing but without the darkroom. I'm not sure how well that is going to work, but I definetly am excited to try it. But anyway, the set with the candles went really well. Maxwell was awesome. She did really well staying still and came up with some awesome poses that I'm really excited about. (Again, only the one shot for now. these ones in particular will be a lot better when I work on them). 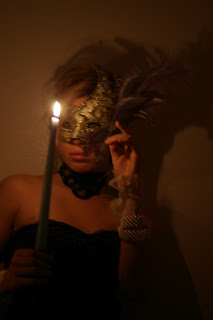 Shooting with Maxwell was an awesome learning experience. I learned a lot about working with a model (even if she's not a professional one, per se). Also, after the photo shoot, Donny and Joseph gave me this whole lecture about model release forms. So now I know all about that. Also, as "homework" Donny gave me these two marketing books to look over. At this point in the day I was totally overloaded so the idea of looking at them made my head hurt, but I tried to absorb as much as I could from what she was saying.

I'm excited because I've learned a lot about my camera recently, too. For instance, I now know how to set the self-timer (I actually did a whole little shoot of self portraits one night because I was really bored), the white balance, and the ISO. It doesn't sound like a lot, but it actually opened up a lot of options for me.

After I got home and had relaxed for a while, I decided to do some research into steampunk fashion. Apparently it was something that I've always kind of liked, but I didn't realize how big/complicated it was. I've always really liked jewelry that utilized clocks, gears, keys, etc. This is just one tiny aspect of steampunk, which is inspired by fantasy/sci-fi that takes place in the Victorian era when everything is powered by steam. Thus the characters dress in Victorian style clothes but use weird inventions that didn't actually exist in that era. As someone online put it, it's almost as if the future happens in the past. Here are a couple pictures of some really fancy (and I'm sure really expensive) steampunk-esque pieces that I found. Unfortunately, I can't remember what website I found them on... 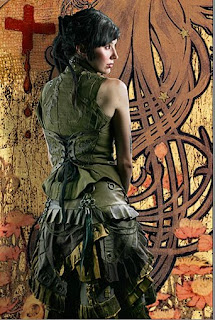 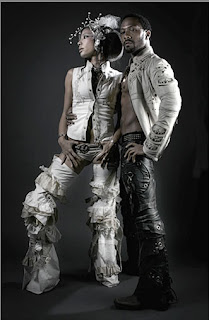 I spent a good 2 hours pouring over images from a google search and also a livejournal group called steamfashion. It really inspired me and made me sad that I didn't have time to make myself a more steampunk outfit for Friday night.

Wednesday I spent a good 2-3 hours reading the thinner of the two books that Donny gave me about marketing. It gave a lot of great information for people looking into commercial photography which was not entirely relevant to my goals right now, but I was still able to pick up quite a lot of info from it. In particular, I was intrigued by the methods of sending postcard sized marketing cards to agencies. I can tell that the second book is probably going to have more of the niche that I think I'm heading for, but we'll see how that plays out.

We were supposed to go to Donna Ricci's home to begin styling her for the Clockwork Fairy shoot that we are doing before Labyrinth of Jareth. However, Donny and Joseph ended up deciding to do it on Thursday instead, since they were attempting to get the 2010 calendar finished. So I decided to use my day off to go shoe shopping. Unfortunately the only store within walking distance was TJMaxx, but i decided to try my luck at finding something there any way.

Their selection was a little slim, but I did find a few that I liked. One was just a simple black pump, another was a square-toed red shoe which I liked, although it was a bit middle-aged looking, and the last was a pair of buckling stiletto sandals in black. i sent pictures to Alicia and of course she voted with the stilettos. I liked them a lot, but was concerned about walking in them all night. however, they appeared to my best bet and since I didn't think I'd get a chance to go any where else to go shoe shopping, I decided to buy them. They were, of course, also the most expensive pairs of shoes at 49.99. What we do to look good.... 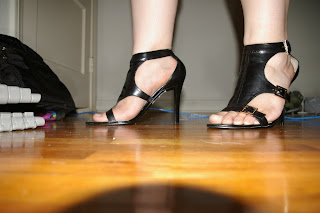 I'm a little (ok a lot) concerned about walking in them all night long. Ho. wever, I hope that I'll at least be able to last a good chunk of the night. And worst come to worst, I'll just go barefoot. That's the only way to dance anyway.
While at TJMaxx, I also found an awesome belt which I'm going to wear with the Harlequin dress. Joseph and Donny have totally turned me into a belt person. Curse them! (Also there's a picture of the mask I bought for it) 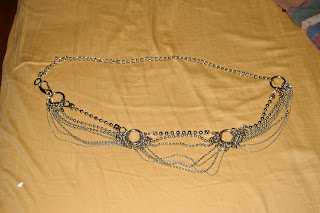 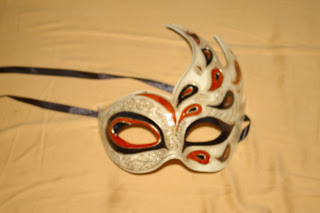 Also, I found these great (and cheap) boxes with clocks in them. I wanted to purchase the clock so that I could turn it into something steampunk-esque to go with my gold and black lace costume for Friday. However, I expected them to be too expensive for me to purchase. Lucky for me, however, they were only 10 bucks. I picked out two, one for a necklace that I am still currently working on and another to turn into a purse. 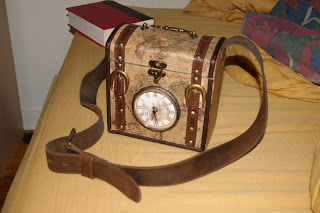 So today we went to Donna Ricci's house. I found out that she actually owns the site Clockwork Couture, which has some amazing pieces. Some of them aren't too expensive. Maybe when I get some extra money, I'll buy something from there. The styling went well; we settled on two outfits and then choose between the two. The one we picked is all black and white with red accents (it uses her new corset). I think they'll turn out pretty well, it'll be exciting to see the final product.

After we were done styling, we spent a good hour in traffic. I now understand everyone's rants about LA traffic and I think I could have gone without understanding them. When we finally got home, we ate and then Donny took me to the Good Will again so I could find a belt to use for the strap of my purse (see above picture). On the way we also dropped off some mail and Donny gave me some advice about mailing prints. Afterward, she brought me home since I had some work to do with my costume and I was tired.

My plan for the remainder of the day is to finish working on my costume. Other than that, I'm not sure. Maybe I'll watch Memento or work on the TOTF store some more. We'll see how long it takes me to finish up my costume.

Kendra
I'm an art and history major at SUNY Potsdam. This summer, I am doing an internship with, Joseph Corsentino, a fantasy photographer based in LA. For the first week, I am going to Cloudcroft, NM for a ModelFest event. After that, I will be living in LA and watching Joseph work as well as working on my own portfolio. My internship will conclude in Eugene, Oregon, at FaerieWorlds. For more information about Corsentino, ModelFest and FaerieWorlds, visit the following websites: http://timeofthefaeries.com http://www.myspace.com/modelfest_nm http://faerieworlds.com/